Participation in the III International Congress of Agrarian History and organization of the next in 2023!

Three days of intense discussions and an opportunity for the ReSEED project to present some of the partial results of the research. From June 28 to June 30, 2021, the team participated in the III International Congress of Agrarian History, focused on Rural Depopulation, Territorial Imbalances and Sustainability. It was organised by the the Society of Agricultural History Studies (SEHA) and the Rural History Network in Portuguese (Rural RePort). The event took place online and had 250 researchers registered, mainly from Spain and Portugal, but also from other countries (Argentina, Brazil, Chile, Colombia, Costa Rica, France, Italy, Mexico).

The role of the institutions

One of the first sessions was organized by Principal Investigator Dulce Freire and researcher Francesco D’Amaro, entitled “Old and New Organizations: contributions to agrarian changes across the Iberian Peninsula”. They also presented the first paper of the session about granaries from the 16th to the 20th century. Other ReSEED members, Carlos Manuel Faísca exposed a work focused on the associations of the 18th and 19th centuries in Alentejo (Portugal) and Extremadura (Spain), while Alberto González talked about old communities and new organisations in Galicia for the same period.

“This session contributed to the discussion on the functioning of institutions and their impact on rural communities, namely in the management of agricultural resources, conditions for innovation and changes (or not) in agricultural systems”, evaluated Freire.

Alberto González added: “This type of event allows us to discuss and exchange ideas that can lead to the discovery of new opportunities and approaches for our research. It also helps to clarify possible weaknesses and new potentials”. 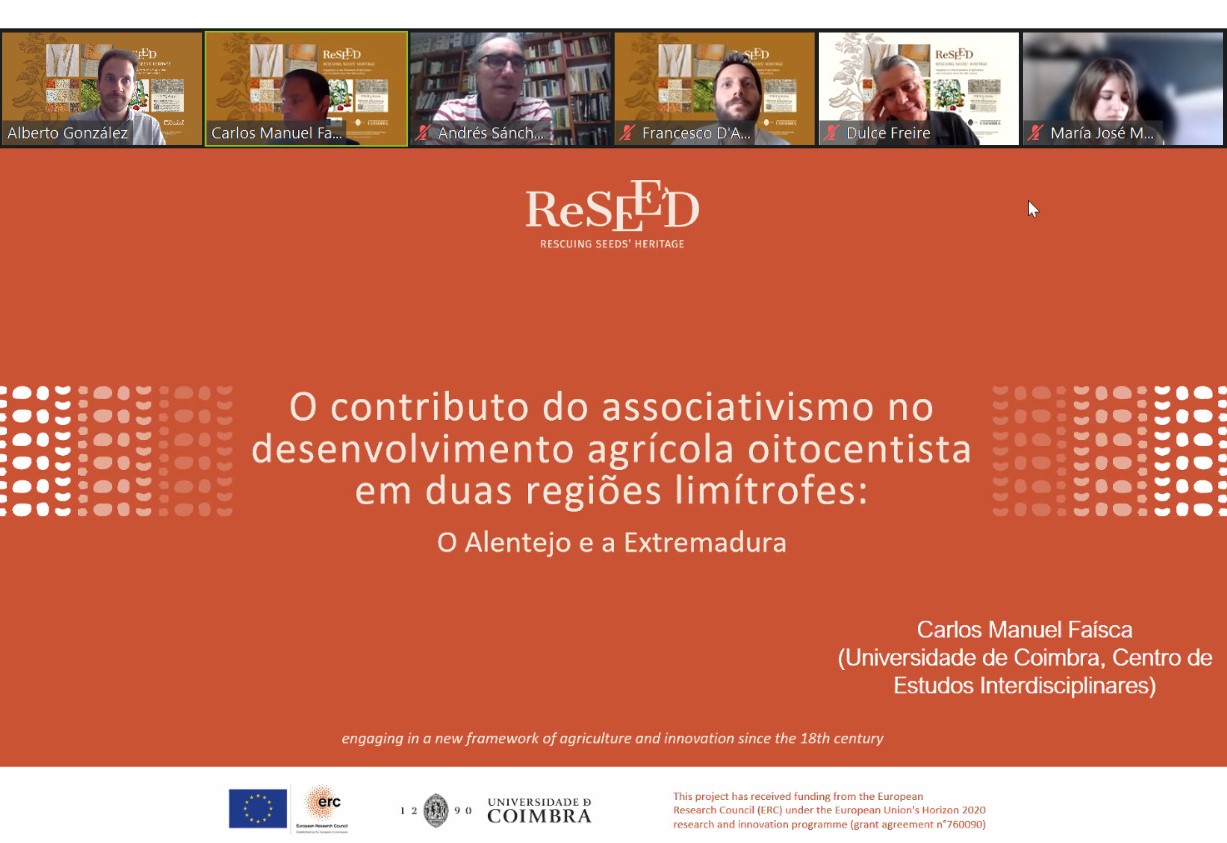 The paper presented by Carlos Manuel Faísca on June 28, 2021, in the III Internacional Congress of Agrarian History.

The Younger Researcher’s session had the contribution of the ReSEED member Leonardo Aboim Pires. He presented the paper “Agricultural dynamics, competitiveness and market: horticulture in Portugal (1850-2000)”, which is part of his Ph.D. thesis research.

Francesco D’Amaro highlighted another relevant topic that took part in the agenda of the congress. “The different strengths of agrarian associations in Spain and Portugal and their consolidation in the Liberal period (between the 19th and the 20th centuries) have been discussed.  Some of them became solid organisations and it was an obstacle for their destruction by the dictatorships in the 20th century”.

At the closure, participants were informed that the next edition of the International Congress in 2023 will be hosted by the University of Coimbra and ReSEED will be one of the organisers. “It is a challenge that we embrace with responsibility and excitement. Agrarian and Rural History are perspectives ingrained in the ReSEED research”, said PI Dulce Freire.

Bringing together family, home and land. How was the process of creating agricultural colonies in Portugal in the 1940s and 1950s? What were the buildings like, what private and collective uses were made of them? What are these same places like today?

The virtual exhibition “Ideological Landscapes. The time of agricultural colonies in Portugal“, launched during the congress, brings the “before” and compares it with the “now”. From archives and streets in 2021, the photographs offer different visions of the changes… of buildings, fields, people, crops, memories.

Dulce Freire explained that agricultural colonies were programmes for the settlement of rural territory with associated farming projects discussed since at least the 17th century, with various experiences over the centuries. However, only with the dictatorship, the State took over a persistent initiative to build agricultural colonies. This becomes evident in the virtual exhibition.

“The exhibition is important to (re)launch the historiographic look on the problem of depopulation of certain regions of the country. It has been an issue for several centuries but it is currently more urgent than ever,” stated Carlos Manuel Faísca. 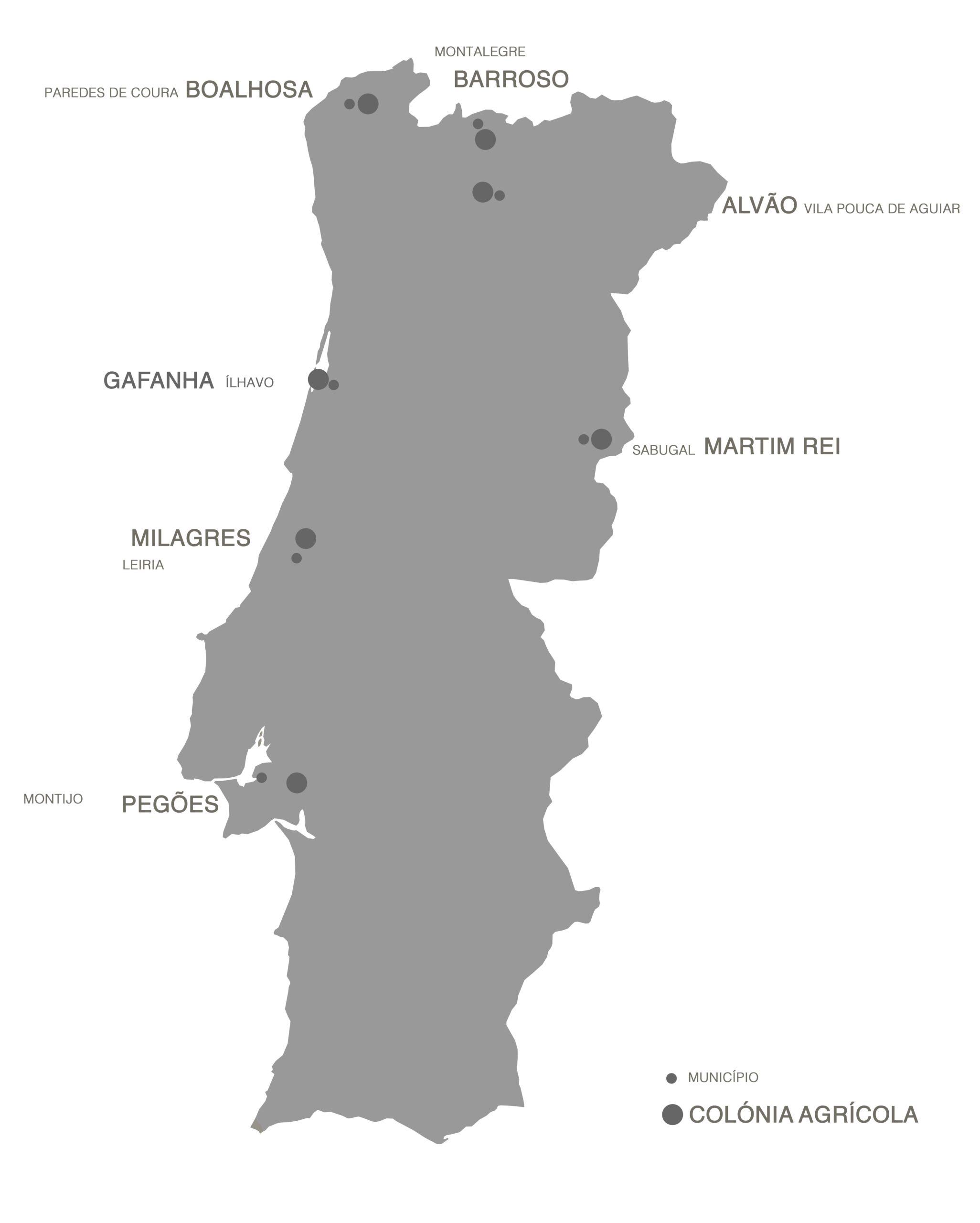 Map with the agricultural colonies covered by the virtual exhibition “Ideological Landscapes”.