In May, ReSEED project published a tweet about a conference on seeds and travelling plants. The tweet said and I quote: “European navigators didn´t travel empty-handed. They took & brought back different plants”. When I read this, I knew it was the best way to introduce the theme that brought me here: coastal sand dunes. What is the connection? – you may ask. A travelling plant, of course! A very special sand-biding plant, called Ammophila arenaria (AKA Arundo arenaria, European beachgrass, marram grass, estorno in Portuguese or gourbet in French). Coastal sand dunes may seem arid barren land where nothing grows, but there are some specific plants perfectly suited to this harsh environment (Figure 1). Ammophila arenaria is one of them, it tolerates heat, wind and salt spray, it grows well in low organic matter soils and when covered with fresh sand. It is native to Europe, the Mediterranean and the Black Sea Coasts. 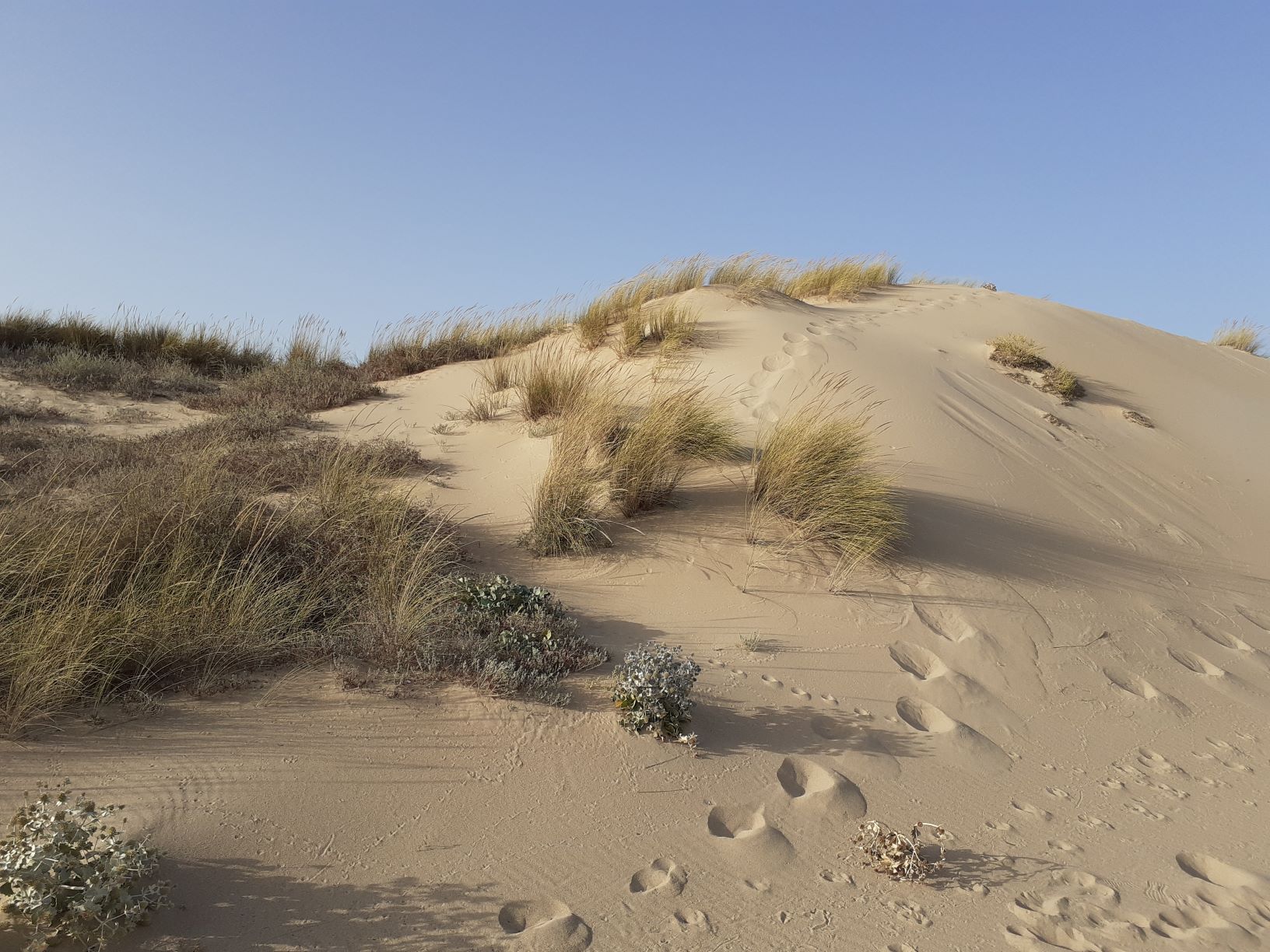 For centuries, coastal populations used beachgrass for making thatched roofs, mats and baskets. They were also aware that this grass and other plants growing on the dunes were important to prevent them from drifting. Without vegetation to hold it, dry sand could be easily carried inland by the wind, invading agricultural fields, silting rivers and lakes and even covering houses and villages. In the mid-1500s, the Portuguese hamlet of Paredes was abandoned as the sand blown by the wind invaded the houses. In Kenvig, United Kingdom, the town, castle and church entered in decay after an extensive tract of land was covered with sand in the middle of the 16th century. In 1744, the dunes buried part of the houses and fields of Soulac, a village near Bordeaux, in France (Figure 2).

The Parliament of Scotland tried to prevent this from happening as soon as 1695, by approving an act for the preservation of meadows, lands and pastures adjacent to dunes, which strictly prohibited the pulling of bent, broom and juniper of sand-hills, recognizing these plants as the natural fences that protected the fields next to the sands. A clause to the same effect was introduced by the British Parliament in 1742. In Portugal, some rules from the 19th century prohibiting the cutting or pulling of the vegetation growing in the dunes might be the written form of old oral traditions of local communities. Also, some scattered and not always accurate information seems to indicate that in some places the inhabitants of coastal areas had for long planted beachgrass as a mean of arresting, by its long-spreading roots, the progress of the moving dunes. 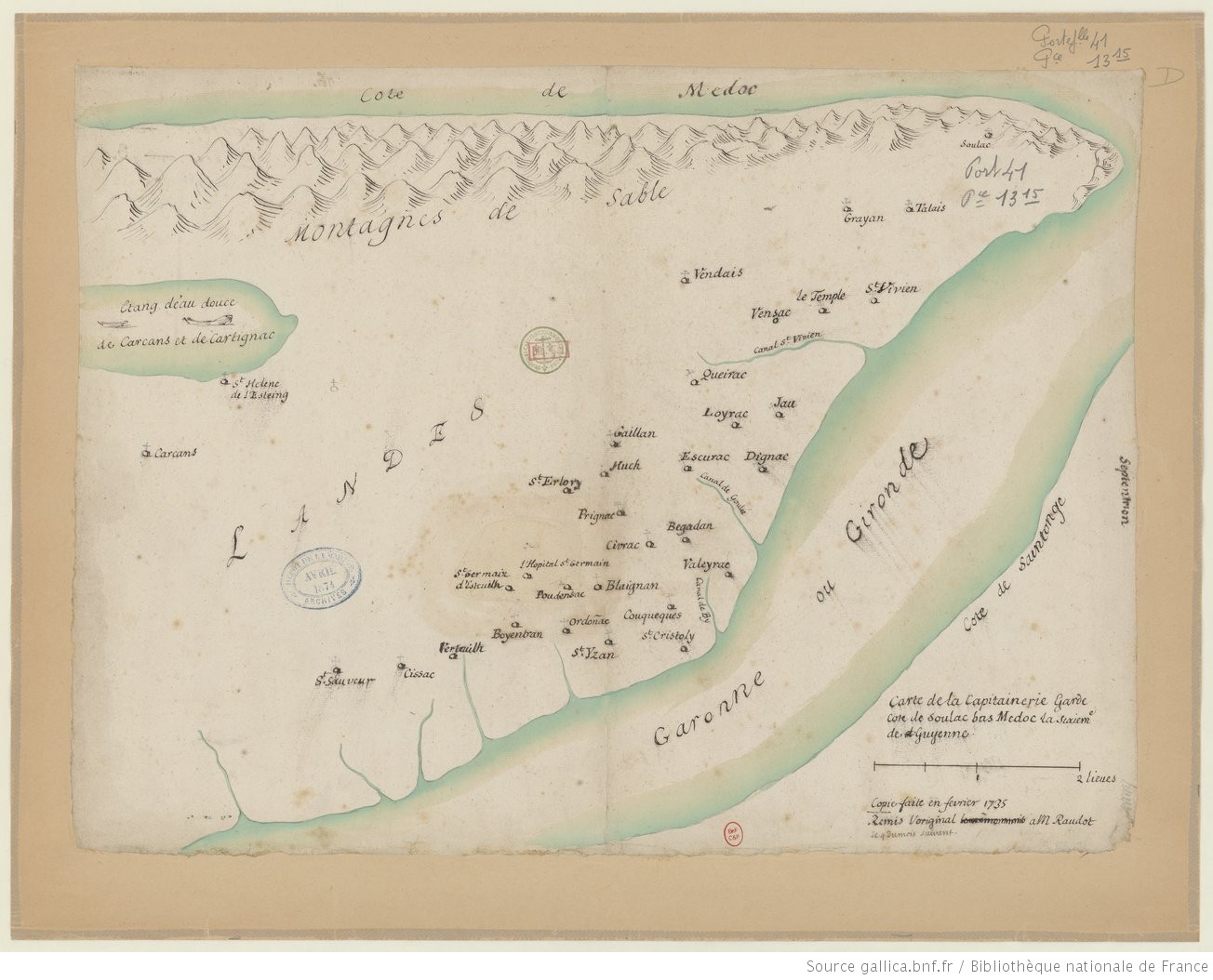 Dunes were considered a danger that had to be stopped. At the end of the 18th century, a French engineer, called Brémontier, developed a method to fix the sand – based on fencing and planting vegetation and trees – that could be applied at a large scale. In 1867, the dunes of Gascogne were covered with pines, showing the success of his technique. Brémontier’s strategy to immobilize the dunes and its successful application spread along Europe. Many governments were interested in converting arid sand into green forests. Ammophila arenaria was a key piece in this reclamation process, as it was used to stabilise the sandy soil to create the right conditions for the pines to grow.

Meanwhile, as Europeans moved to other continents and introduced their agricultural practices in new territories, fell forests and explored local resources, they propitiated soil erosion. Transported by rivers, more sediments arrived at the shore, feeding beaches and dunes. The newcomers also introduced cattle into regions where it did not exist before, as Australia. Grazing cattle on the dunes destroyed their vegetation cover and set them in motion. Places as far as Oregon, in the US Pacific Coast, or the Manawatu-Whanganui region in New Zealand began having trouble with the dunes (Figure 3). 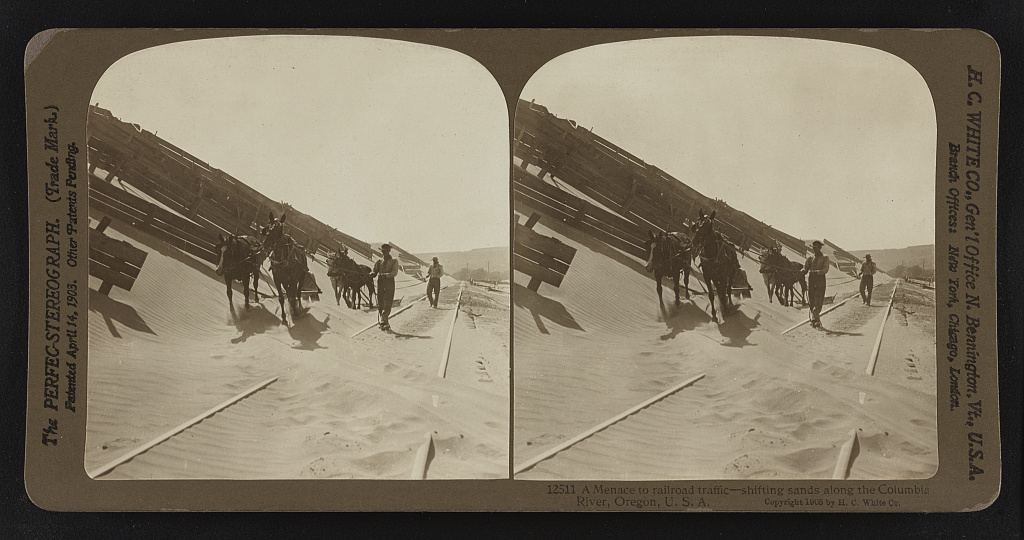 In the 1890s, Ammophila Arenaria was being used by local farmers, in Okehu (New Zealand) to stop the encroachment of sand upon their lands. In 1900, the US Department of Agriculture was testing several varieties of sand-biding plants – including the European beachgrass – in an experimental station in Oregon. In 1915, the Mozambique Company was advised to use marram grass to consolidate the dunes of the city of Beira to prevent coastal erosion. Later, in the 1920s, the Portuguese used Ammophila arenaria and other exotic species in their efforts to stabilise the dunes of the Limpopo river mouth, in Mozambique.

As the shifting sands become a problem in many regions of the world, the European practices for dune fixing were widely adopted. This means that Ammophila arenaria circulated through networks that crossed borders and spanned the globe (Figure 4). The way this plant and the knowledge about its use were transferred has never been studied. Following this species as it travels around the world offers the opportunity to move beyond nation-state boundaries to tell narratives of human-nature relationship in which the local and global are linked. 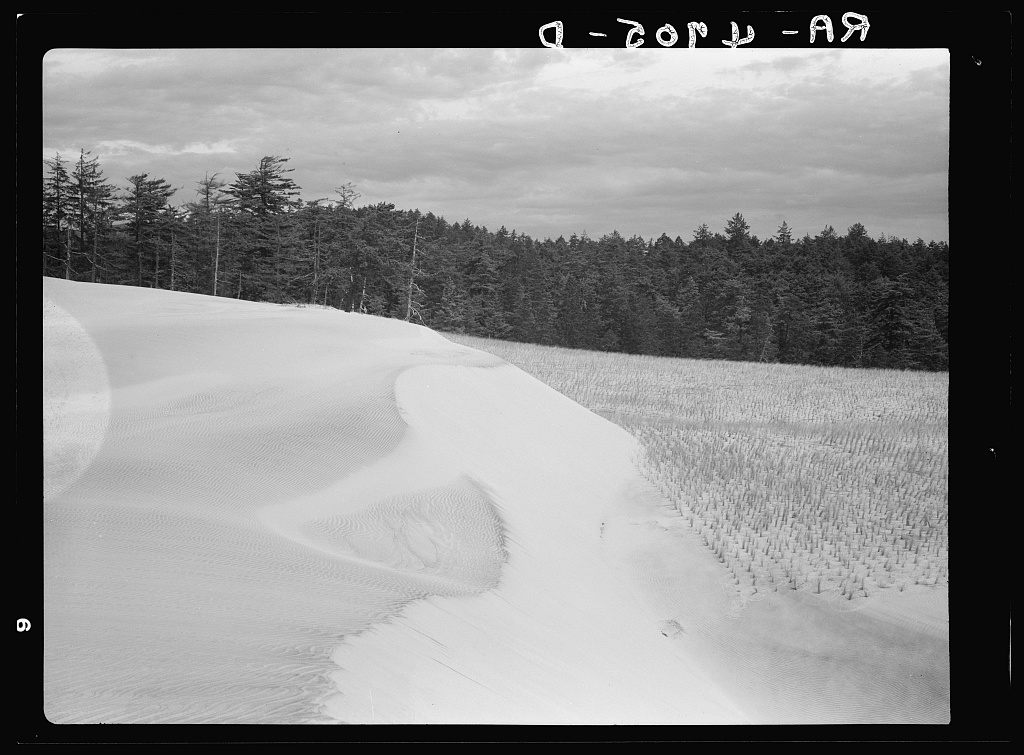 Ammophila arenaria and dunes are far from being an issue from the past. In fact, these two elements are representative of the challenges concerning coastal management and environmental issues in the present. This makes them particularly interesting for future studies. As the European beachgrass became widely naturalised outside its native range, it turned into a menace to some ecosystems, threatening native plants and animals. In places like the Oregon coast and the Manawatu-Whanganui region, efforts are being made in the last years to eliminate this invasive species and re-establish the moving dunes and their biodiversity. However, this intervention is controverse and contested, revealing the existence of different views about dune management. Climate change and rising seas turned coastal protection into a top priority worldwide and dunes were discovered to be the best natural defence against flooding. So, they are being integrated in shore-protection schemes to work as buffer areas and Ammophila arenaria is key in these rehabilitation projects, because of its sand-trap effects (Figure 5). There is a lively debate about using beachgrass or taking it among scientists, ecologists and managers. Therefore, it looks like that in the coming years the future of people living on coasts will be deeply entangled with both grass and sand. 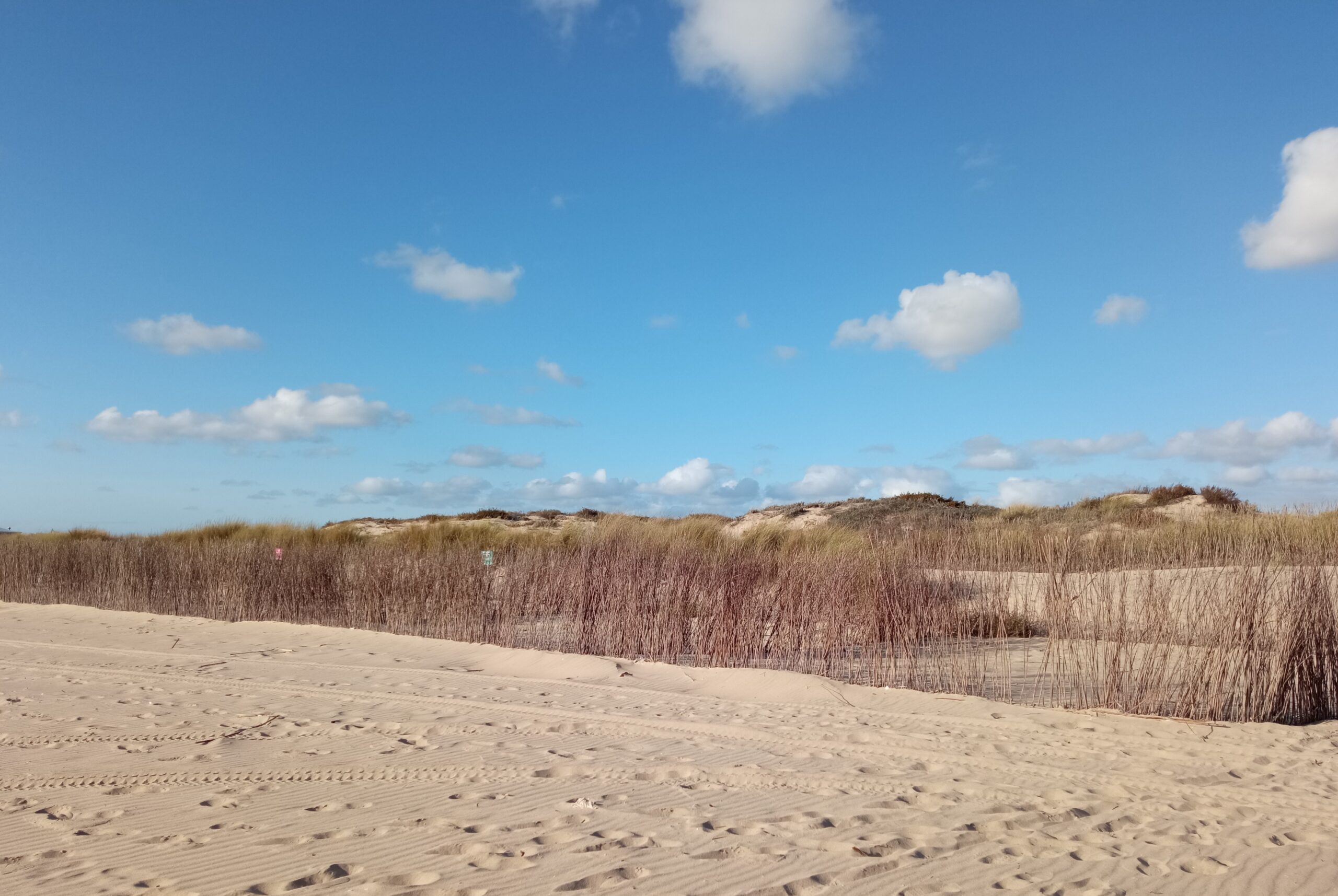 Ph.D. in Contemporary History, researcher at the Centre of History of the University of Lisbon, Joana is the Principal Investigator of DUNES. Sea, Sand and People, a project supported by a Starting Grant of the European Research Council. She is also co-editor of the journal Coastal Studies and Society, launched by SAGE, in 2021. Her teaching and research interests lie in the environmental history of coastal zones, considering risks and vulnerabilities, extreme events, climate change adaptation, coastal management and ocean’s cultural heritage.