In 1513, Gabriel Alonso de Herrera published the Work of Agriculture, considered the first treatise written in Spanish that systematised practical farming knowledge in the form of a manual. Its topics include the breeding of several domestic animals, the cultivation and uses of vegetables, their fertilisation and care, besides general issues about the composition, analysis or preparation of soil. Precocity served Herrera to achieve great significance among other manuals of agrarian education, both amidst his contemporaries and future authors, and not only in Castile, but also beyond its borders. The publication of multiple editions confirmed it: a 2014 study developed by the Spanish Ministry of Agriculture, Fisheries and Food documented thirty-four of them in these five centuries, including six Italian translations, two into Portuguese and one into English. While Herrera was alive, six editions were published, reflecting little updates, better clarification and more accurate concepts in some cases. 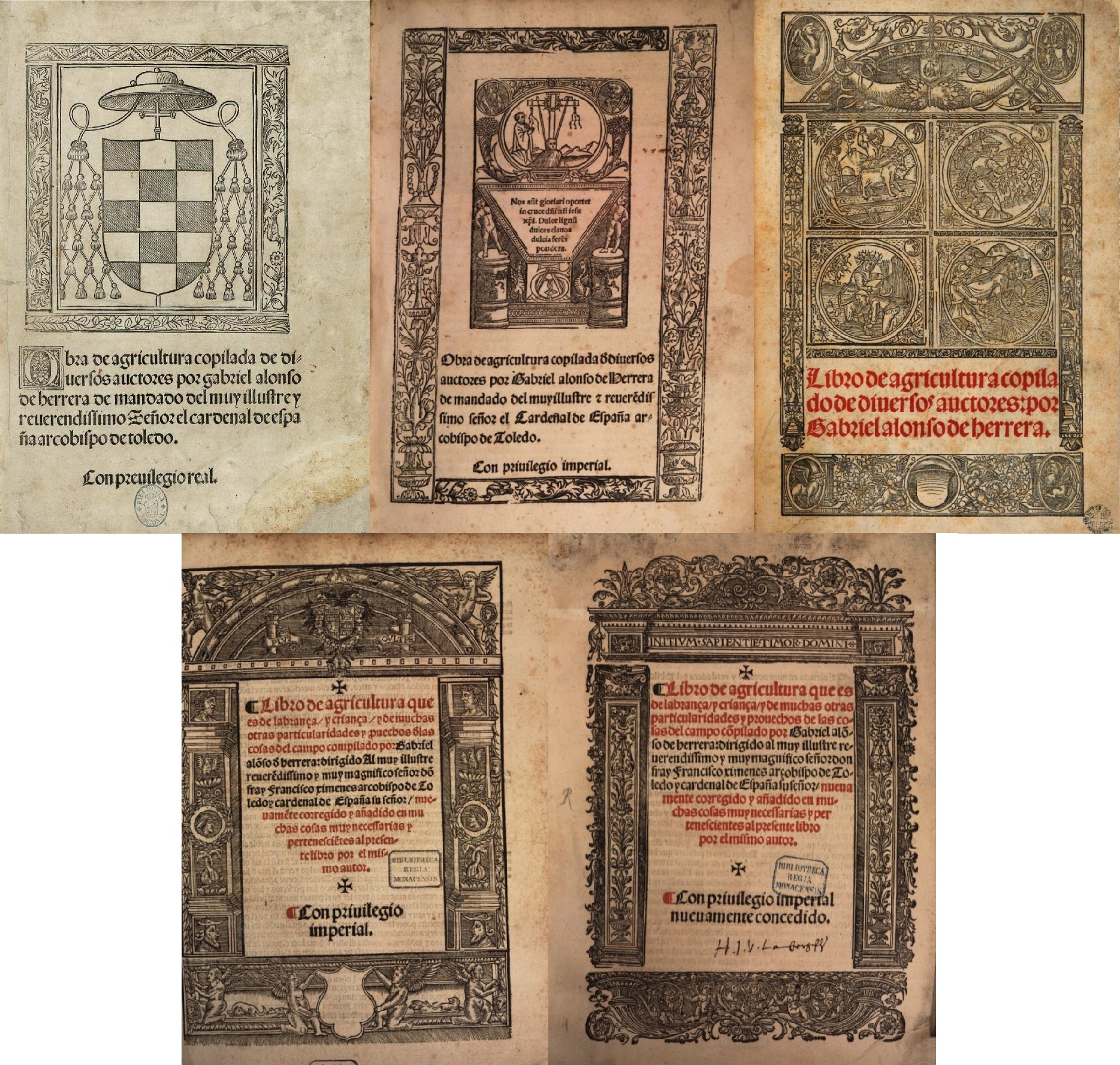 The importance of this work is such that, after the anniversary of its third centenary, the Economic Society of Madrid published an extended edition written by some of its members, renowned scientists from the Royal Botanic Garden of the capital. The book includes several volumes published in 1818-19. Entitled “General Agriculture”, it offers an excellent opportunity to recognise the evolution of agricultural knowledge through a compared perspective of both texts – the original one (1513) and this extended and commented version. Now, we are going to focus, specifically, on the analysis of the changes in the field of soil knowledge and its interpretations as an essential component of agricultural activity. 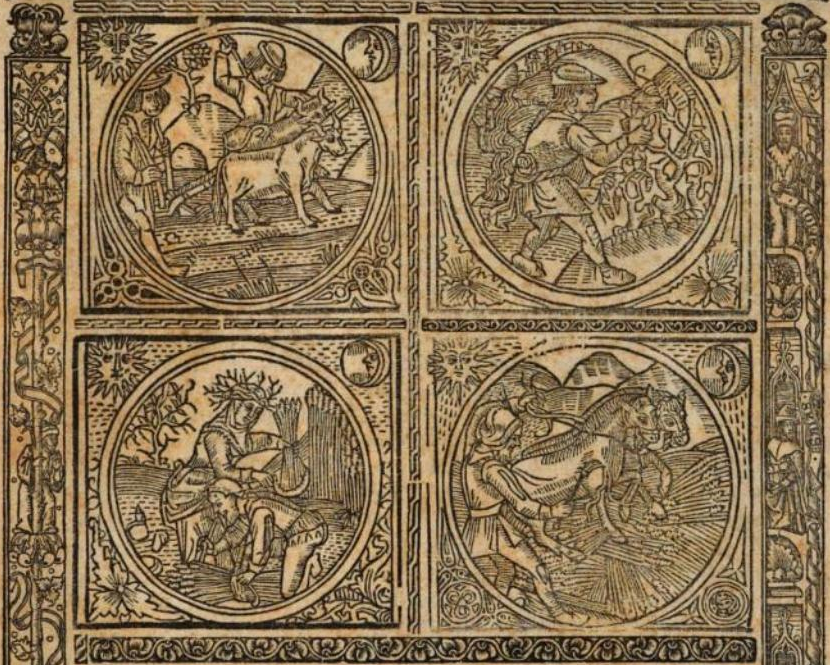 A few of the many farming tasks included in the Book of Agriculture (ploughing, vine-growing, reaping and threshing). Cover detail of the reedition published in Zaragoza in 1524.

The vision of Herrera starts from the belief in a glorious past of an agrarian activity that had been impoverishing slowly. This decline could not be caused by the soil, he wrote, because “its entity and quality never change (…) neither for being fruitful nor continuing to give birth, it barely gets tired”. If soil does not lose reproductive capacity, the lack of work was the unique possible cause to explain poor crop yields. Herrera believed this was obvious since God had created soil “perpetually fecund, giving the strength and vigour of perpetual youth”. An irrefutable argument of faith that established the incorruptibility of divine creation. However, Herrera identified great differences among soils. Generally, the soil is cold and dry, but its nature and fertility can be altered due to certain local variables that allow the author to make a classification: according to its position, land can be placed in a plain, valley or mountain, and within this category, in a slope or a hill. Lowlands are considered better because they have “more substance”, received from the areas above. Secondly, the quality factor gives rise to lands that, as the author said, “either are fertile, thick, outstanding, or they are completely sterile and quite bad, or have the middle, and they are not bad at all nor quite good”. Finally, in the goodness of soil also intervene temperature and moisture, which allow the author to speak about hot, cold or mild lands.

Some of that traits could be directly observed, but Herrera also stated several patterns to identify the soils suitable for agriculture, like some kind of rudimentary physicochemical principles. Some of them could be perceived through the senses: the colour was not decisive, but touch or taste could be signals of quality. The existence of good-tasting water indicated an appropriate land for cultivation. Well-considered soils retained heat and moisture humours better, a characteristic used by wild flora, growing vigorously in prosperous lands. Certain species were associated with particular kinds of soils, but there is still no theory that showed why this happened. Once it was clear that not all soils had equal characteristics, Herrera wrote about the possibility of correcting and improving the lesser productive ones, applying technics like fertilisation, irrigation or fallow. The best option, according to the text, was “to accommodate to each soil what is good for and properly fits on it”, a core idea that was not respected in Spain, resulting in less productive agriculture. 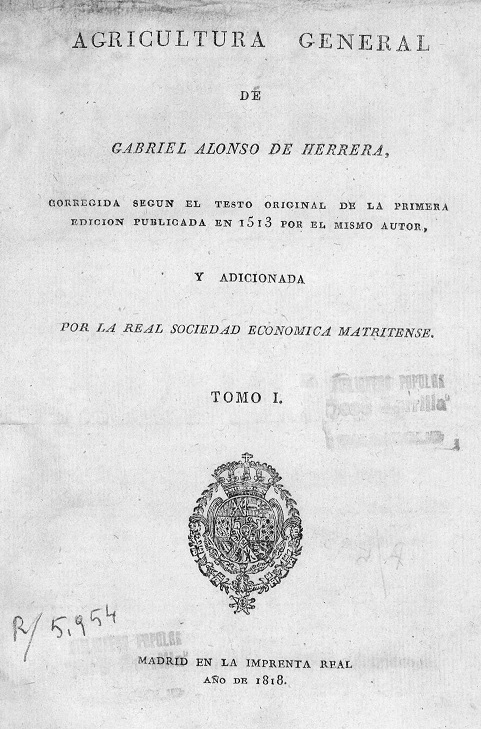 Cover of the 1818-19 commented and extended reedition published by the Economic Society of Madrid with the most famous title of the work, General Agriculture.

Three centuries after these statements, the analysis of the extended reedition reflects the deep changes that had taken place in the perception of the soil and its knowledge. The advances have been many, but Herrera is still considered as a master by the researchers of the Botanic Garden of Madrid, so, this reissue has to be understood in terms of a tribute, mainly. A proof of this is the respectful critiques of the text of 1513, even in the parts where the knowledge of the 19th century proved clear analytical errors in the original work.

In this text, one of the clearest advances is in the acknowledgement that, for plants, “the earth not only serves as a fulcrum to sustain themselves but also provides them nourishment”, through, specifically, “the juices and particles that they extract from the soil”. On the other hand, there is a general agreement on the criteria for land classification, but these authors criticised the inaccuracy of a concept that includes soil that, due to its quality is negligible in its products, since none would have to be so by correctly choosing the ideal species for the climate and the soil type. Such a statement could only be made on the basis of much more precise knowledge of the components of the soil, which of course are explained in the work of 1818. The classification shown is more accurate, focused on more objective and technical characteristics than the ambiguous valuation of good, intermediate or bad land. According to it there were “four species of primitive lands” that farmers should know: alumina (also clay), limestone, sand (also silica) and vegetable soil. All the soils were formed by the mixture of these lands in different proportions. 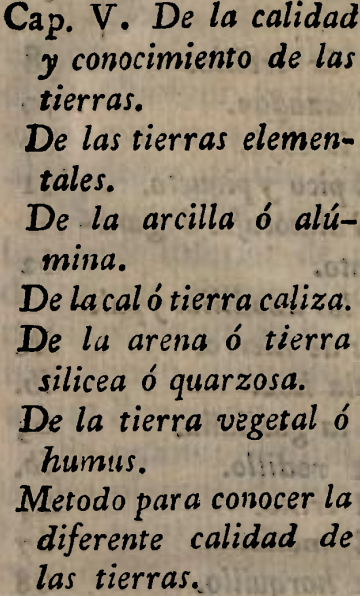 Claudio Boutelou was in charge of the revision and addition of contents about soil knowledge. The land classification included in the General Agriculture (1818-19) already appeared in his work Elements of Agriculture (1817).

Also, the criteria mentioned by Herrera for identifying soils suitable for agriculture lost importance. Although some of those were valued positively, such as moisture retention, the organoleptic criteria were no longer valid. Instead, another method was favoured: the analysis of the soil layers through samples, which allow seeing their composition according to the classification of primitive lands, and whose percentages could be measured.

Turned into a figure of authority, the work of Herrera persisted for centuries. An exercise of commentary and expansion, three hundred years after the original publication, offers a wonderful opportunity to observe the changes and progress of knowledge. At this point, the field of soil perception is a good example to observe how the conception of the divine origin of the components of nature, and their consequent incorruptibility, gradually moved to a reasoned study of them, based on the experience and experimentation.