Seed-saving of diversity and autonomy in Portugal

The expression “perdi-lhe o inço!” is used in the Algarve (South Portugal) to indicate that the seeds (as well as seedlings or other propagation material) of a certain variety have been lost. In Alto Minho it is also customary to say “olha, já me desinçei disto!”, when certain varieties are lost and it is necessary to ask someone for them, usually neighbors. Whichever expression is used locally, “não perder o inço” is imperative.

Small farmers, who carry out their activity within the scope of family farming and whose production is primarily intended for domestic consumption (often selling only surpluses at local markets or to occasional customers), are those who most strongly maintain the practices of harvesting and storing seeds, especially of the older varieties. 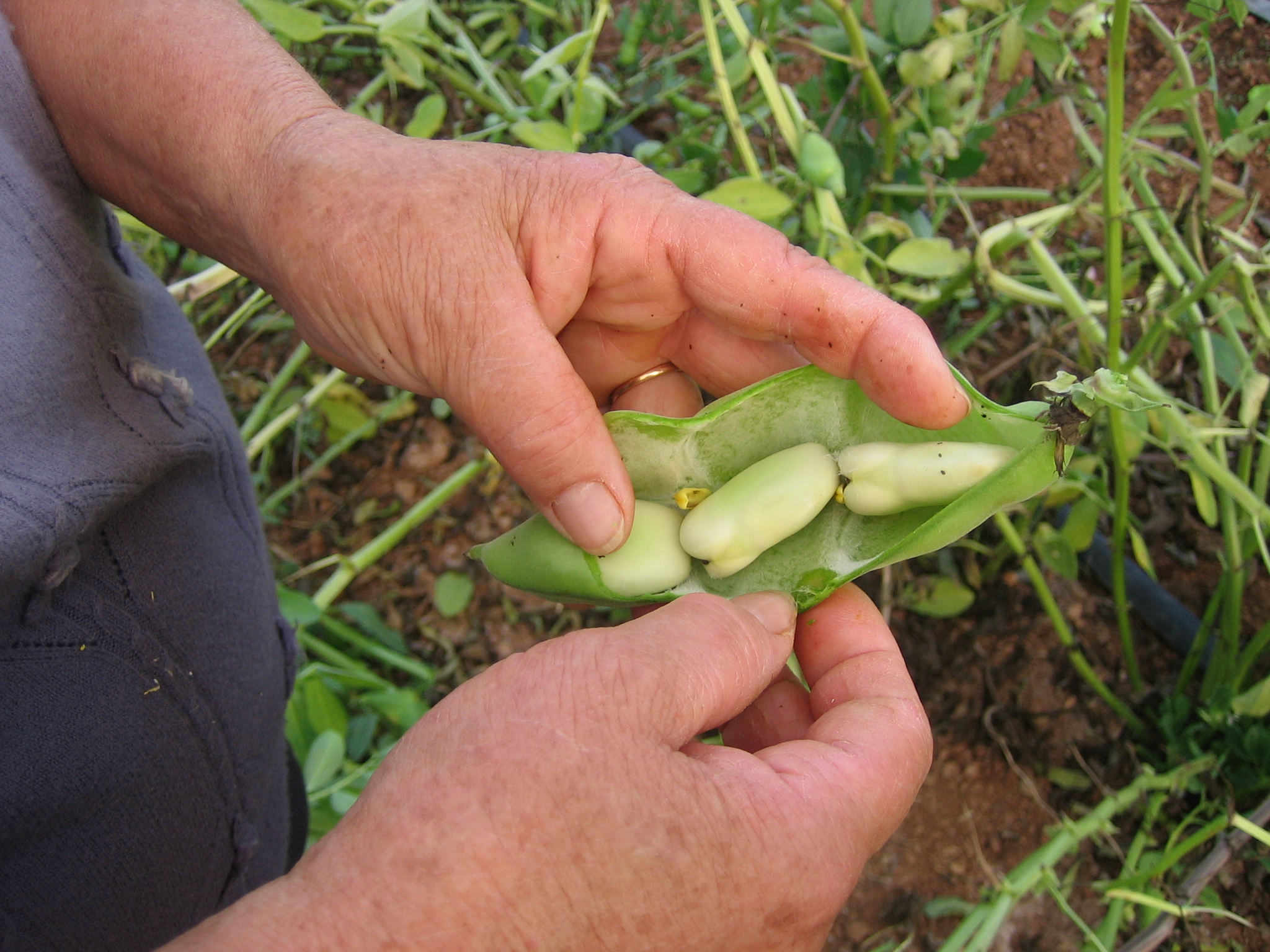 Farmers who produce for the general market, being able to keep crops of local varieties (for domestic consumption and/or for ritual foods or to satisfy special customer requests), seem to tend to use commercial varieties mostly, either in the form of seeds or plants. The explanation lies not only in the greater profitability of these varieties but also in consumer habits. Among the factors influencing the decision to harvest and save seeds for later sowing, can be counted the difficulty in finding other sources for obtaining seeds of a certain variety and the need to ensure greater autonomy, restricting the costs of production.

Seed saving of certain varieties is linked to their relative rarity and, above all, to their distinctive character, ie to the specificity resulting from the special adaptation to ecologically and socially distinct places where they were selected and maintained and, therefore, with their strong connection to local cuisine, family and collective history. 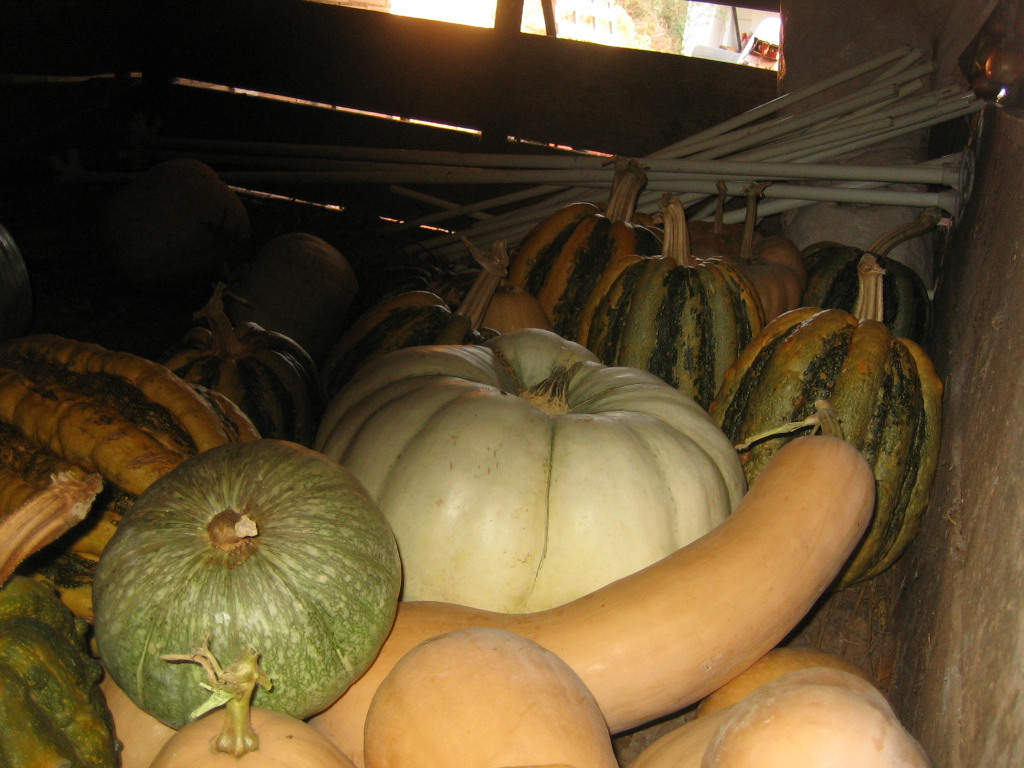 Among the seeds kept, a significant part are varieties considered locally as old or that have always been known, often referred to as “de toda a vida” (regardless of their actual age). Older varieties are often considered less productive, less appealing to those who buy in the market, but they are almost always recognized as tastier, more resistant to diseases and pests and less demanding, namely in water and fertilizers. Some examples are macarronete or capão beans, old chickpea, casusa pea, algarve broad bean or casca de pau and frade pumpkins.

In the two villages in northeastern Trás-os-Montes (Paredela and Ifanes) where I have developed research, the indigenous chickpea, for example, seems to continue to be much more appreciated than the so-called puchero, or Spanish chickpea, despite the first being smaller than the second (namely, because “it isn’t so tasty for the soup”).

Often, new and old varieties of the same species are cultivated simultaneously, thus guaranteeing production for sale and, at the same time, the supply of old varieties for domestic consumption.
This happens with Alice (in Monte Ruivo, Alte, Algarve) who, concerning domestic consumption, prefers to use her own seeds, but when it comes to producing for sale, considers it more profitable and safer to buy the plants (in this case, lettuces) from plant nurseries. 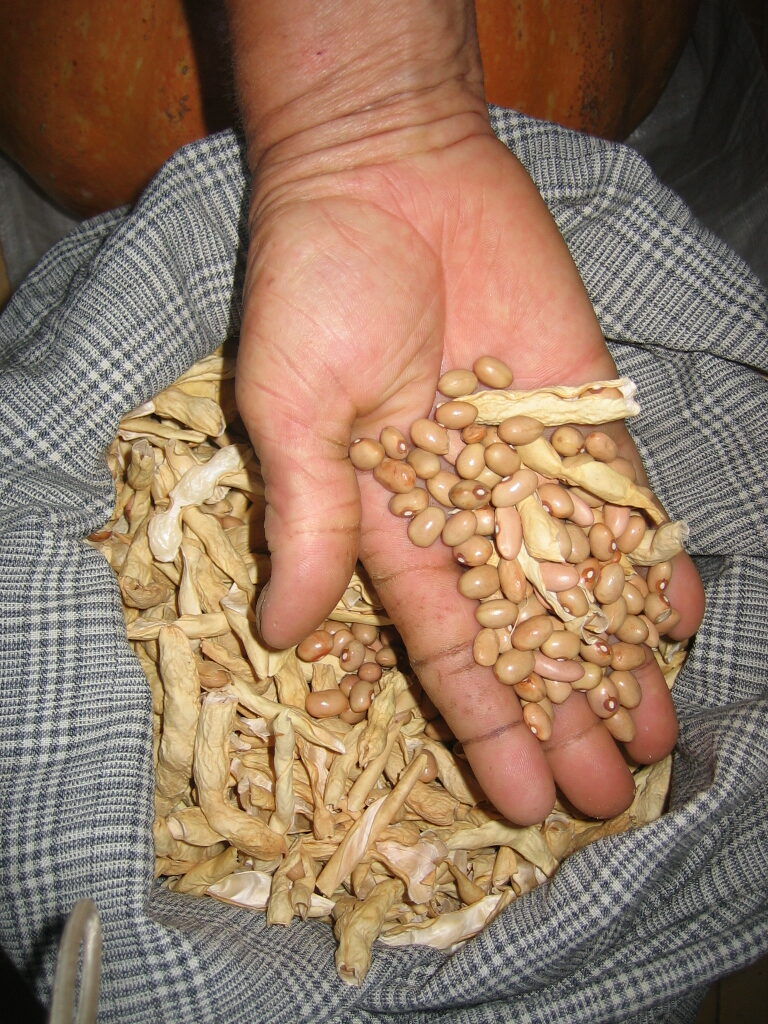 The observations made during the research point to a greater number of local varieties being maintained in the north, more specifically in the two villages of Terra de Miranda, Paradela and Ifanes (Miranda do Douro), where a great diversity of cultures is kept and the strong social networks allow the safeguarding of old varieties, through the circulation of seeds and/or plants among neighbors and relatives. An exchange that fits into the broader system of exchange of goods and services between neighbors of the same village.

Stored in a box inside an old refrigerator, in a piece of burlap or in a rolled-up pair of trousers in a sheltered corner of the warehouse, or in the barn, the maintenance of traditional varieties is intrinsically linked to the survival of communities that developed them and it depends on sociability networks. 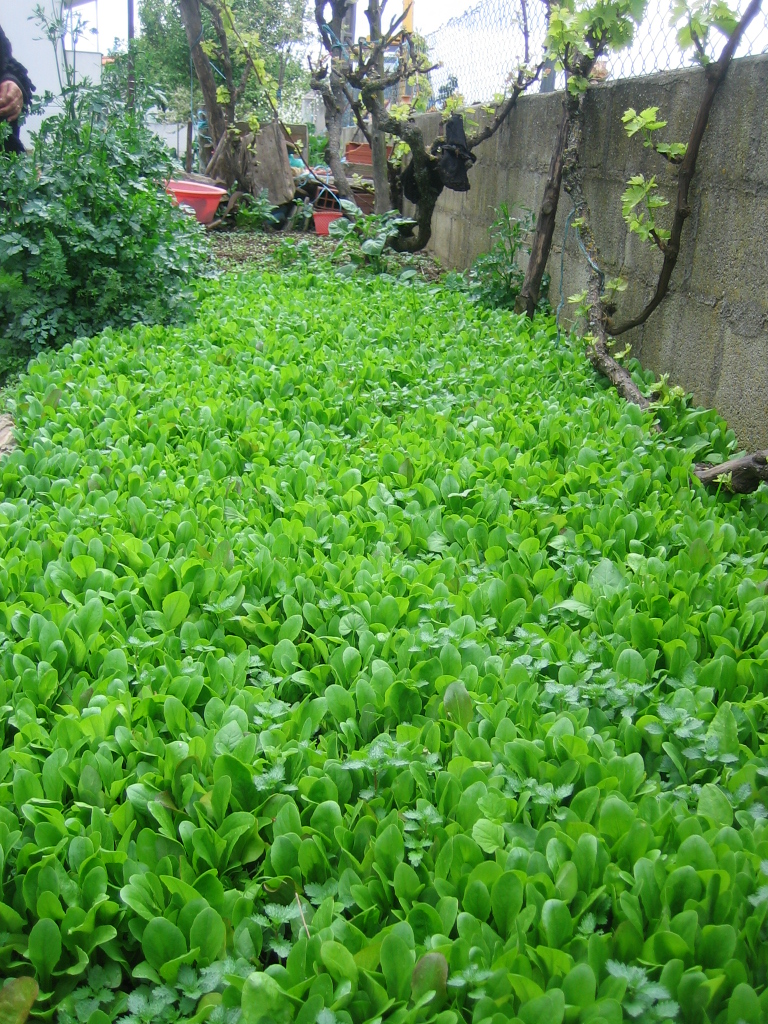 By sharing seeds or plants, the farmer not only facilitates their dissemination and the continuity of their evolution, but, in principle, guarantees an eventual emergency reserve in case they are lost. The donation of seeds or/and plants presupposes retribution, deferred in time, and, for that reason, it is not done randomly. Those who offer them hope to be able to receive seeds of that or another variety later in case of need. A lady from Ifanes, for example, mentions that she managed to recover the seeds of a certain variety of tomatoes that she had lost thanks to a neighbor, to whom, years before, she had given some of those tomatoes and from which the neighbor had kept seeds. The exchanges are all the more intense the stronger the neighborhood relationships and the survival of an old variety, absent from the seed market, is strongly dependent on the social structure in which it developed. If the community that maintained it dissipates or if social ties and neighborhood networks fade away, it will hardly be possible to guarantee its continuity. 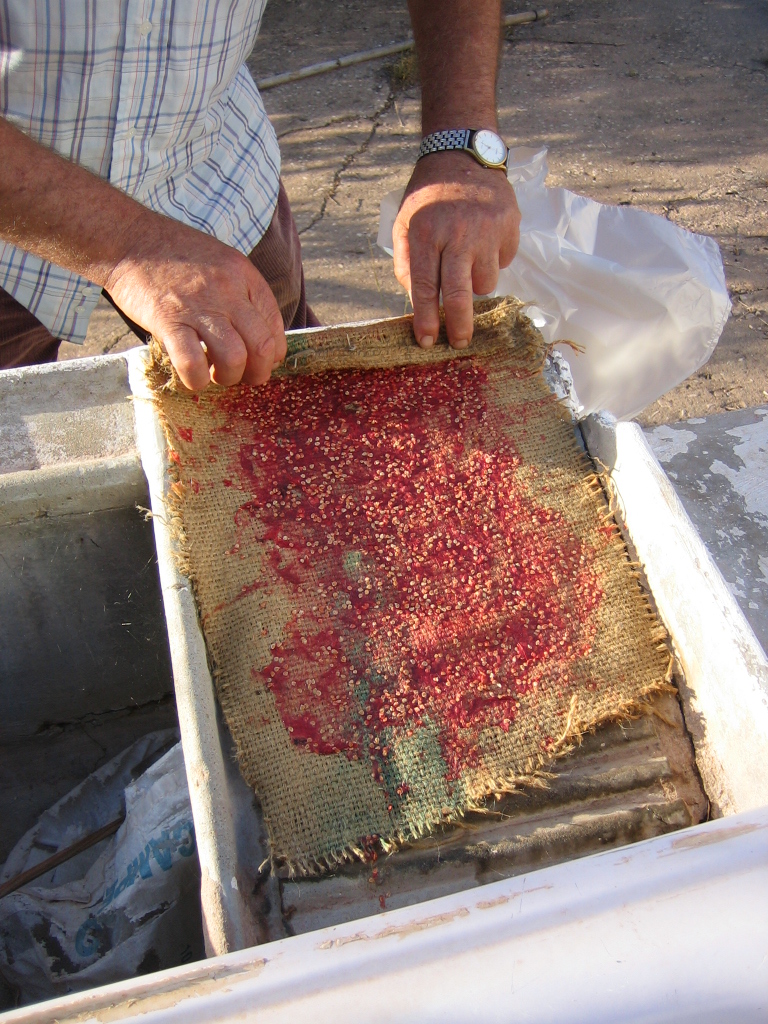 The seeds that pass from hand to hand, from parents to children and between neighbors, family members or friends, are testimonies. They carry knowledge, memories and affections. The continuous recombination that produces local varieties is the result of their circulation, use and the effort of their users to, over time, improve their performance and yield in interaction with the specific natural conditions of each place or region.

The progressive disappearance of local varieties in favor of industrially produced exogenous varieties is both a reflection and a cause of profound changes in ways of life, in eating, in perceptions of the relationship with the land. And the decline in agrobiodiversity turns into greater dependence and vulnerability of farmers and the loss of food sovereignty. 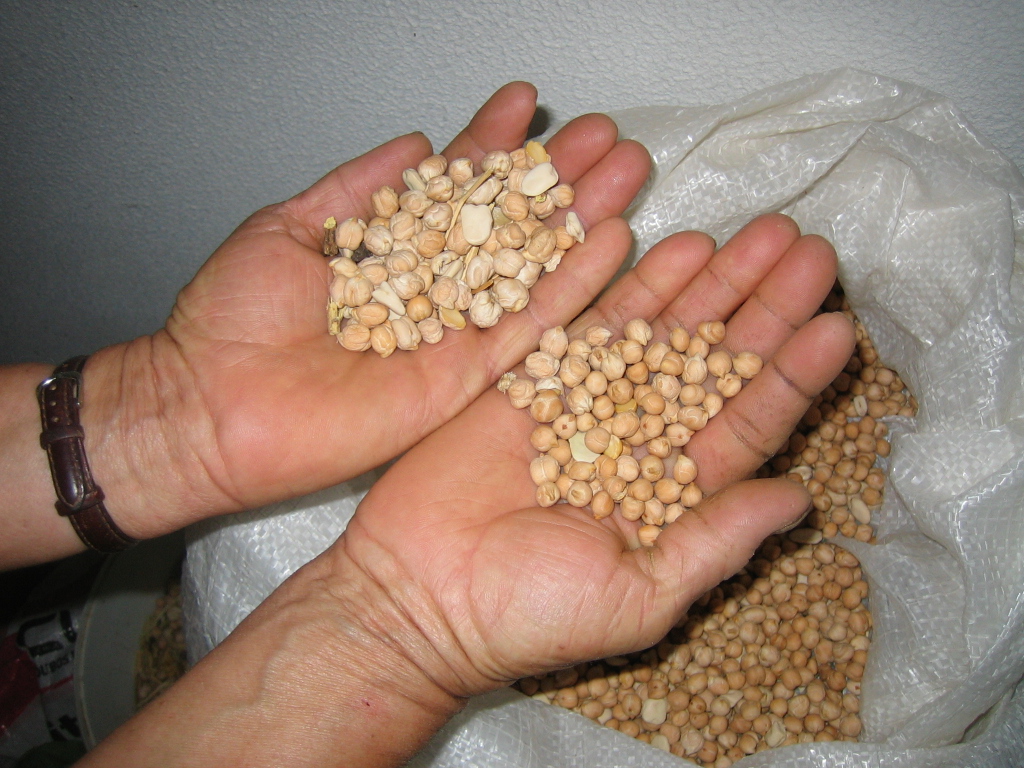 The preservation by farmers of traditional varieties is part of a diversification strategy, which seeks not only to guarantee a varied diet throughout the year but also to minimize risks. These agricultural systems, adapted to local conditions and based on the diversification of cultivated species and varieties, allow that, even in adverse climatic conditions, it is possible to ensure continuous production with less risk of loss of production, thus constituting a valuable resource in the face of the impact of climate change.

Maria Helena A. G. Marques, anthropologist, is the author of the book Guardar as Sementes: Preservar a Biodiversidade Agrícola e a Pluralidade Cultural, edited by Le Monde Diplomatique/Deriva Editores (2017), which resulted from her doctoral research, mainly carried out in Terra de Miranda and the Algarve Beira Serra (Portugal). In 2019, she led a preliminary study for a living museum of Arte-xávega in Costa de Caparica. She did the study “A sericicultura em Portugal: contributos para a sua história na Beira Interior”, carried out in partnership with the National Museum of Ethnology (2008) and her master’s thesis focused on the recognition process of the donkey breed of Miranda. She is a collaborating researcher at the Centre for Research in Anthropology (CRIA).