Baja California Sur is a territory colonised by the Jesuits, previously occupied by native peoples. With this colonising process in the desert territory, Misiones-Huertas were designed in which crops brought from Europe were planted, together with native seeds from wild plants or domesticated by the previous inhabitants. The study of this Peninsula will allow us to understand a historical cycle of experimentation on agrodiversity in situ in desert climates, with efficient management of the resource – scarce – water by means of hydraulic irrigation ditches also transported and adapted from Southern Europe.

More than 2,895 species and subspecies of plants have been reported, which have the physiognomy of a desert of varied cacti coexisting with small trees and shrubs. The riparian vegetation that thrives in the wetter canyons is characterised by the presence of palm trees, mainly blue palm (Erythea armata), taco palm (Erythea brandegeei) endemic to Baja California Sur and royal palm (Washingtonia robusta); it is also common to find date palms, introduced in the 18th century by Jesuit missionaries in the Baja California oases.

This agrodiversity spreads around the places where water emerges to the surface in the middle of the Southern Californian desert (aguajes), places where the original peoples of the Baja California Sur peninsula (Guaycures, Pericúes and Cochimíes) settled. The Northwest Biological Research Centre (Centro de Investigaciones Biológicas del Noroeste – CIBNOR) has located 184 oases in the peninsula, of which: 93% (171) are in Baja California Sur, 48% are typical oases, as they have visible surface waters, and 52% are atypical oases, with temporary streams. 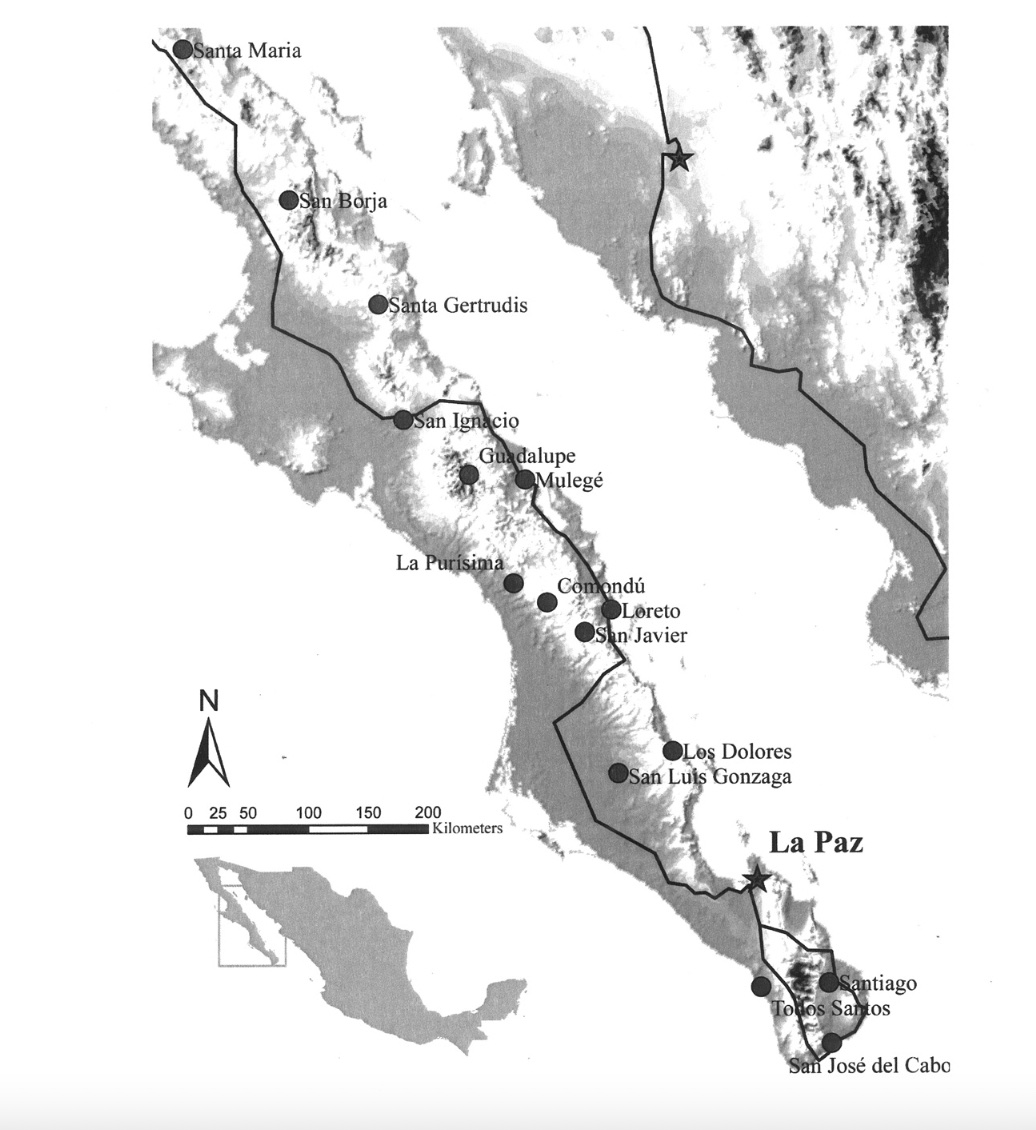 Since the end of the 17th century – in a long wait since the Auto de Posesión of Hernán Cortés in 1535 – with the arrival of the Jesuits to the Baja California Sur Peninsula, a process of colonisation began. It involved both the settlement    – and conversion into agricultural labour – of the native peoples, who lived until then as hunter-gatherers, and the design of orchards with Mediterranean climate vegetation, both with native species and the arrival of seeds of Mediterranean origin. The adaptive management of natural goods by the Jesuit colonisation of the desert territory was facilitated by the use of plants, shrubs and animals, used by the native peoples for their food patterns. Some of these crops were adapted in the mission gardens, either to produce food with legumes (azote, mesquites), wood (cardones, Pachycereus pringlei) or fruits (pitahaya hylocereus, etc.).

Since their arrival at the first permanent foundation, Loreto, made in 1697 in a spot in the Gulf of California that the Indians called Conchó, the missionaries and their assistants did not stop looking for favourable sites that met the requirements to make the change toward cultivation systems in areas with water availability. Between 1699 and 1720, seven more missions were founded, of which San Francisco Javier in the Sierra de La Giganta, San Juan Bautista Ligüig towards the coast of the Gulf of California and La Purísima Concepción, closer to the Pacific, as well as the Mission of Loreto, were permanently linked through a network of roads that was laboriously opened thanks to the indigenous effort under the control and coercion of the Jesuits. These Missions/Gardens became production and consumption units, exploiting indigenous labour, and designing hybrid agroecosystems with native and imported species, generating in-situ agrodiversity laboratories. These vegetable Misiones-Huertas (in Spanish) are what we have called Oasis.

Misiones-Huertas as a Seedbed of Agrobiodiversity

In this general context, the orchards located in the oases were designed based on a stratified farming system, where the upper part is occupied by date and taco palms (Washingtonias) and the lower by plantations of olive, citrus, mission grapevines and other perennial fruit trees, interspersed with open spaces where annual crops are grown. While the extent of the orchards and irrigation ditches has been transformed over time, many of these fields contain ancient varieties that have been cultivated by several generations of farmers: first the indigenous neophytes, then the ranchers who followed them, and today the families of the oasis residents who tend the fields.

Date palms, pomegranates, olives, figs and grapes came from the Arabian Peninsula, North Africa and the Mediterranean region; they were transported to Spain and crossed the Atlantic Ocean as seeds, live cuttings or plants, until they reached the east coast of Mexico. Some species, such as coconut and mango, arrived directly in Mexico via the Pacific Ocean on the Manila Galleons. Other species native to the Americas, such as custard apple, granadilla, agave, nopal, nopalillo, guava, papaya and sapote, were transported through the Gulf of California to the orchards/Oasis of Baja California.

If we take the San José de Comondu Oasis as an example, we can see that in the 241 oasis orchards there are a total of 89 species of perennial crops, belonging to 74 genera and 36 families that have their origin in the Gulf of California.

The genera with the most species represented were Citrus (13 different species plus hybrids), Prunus (5 species), Annona (4 species), and Morus (3 species). Among the families, Rutaceae (16 genera), Rosaceae (10 genera), Moraceae (6 genera), Anacardiaceae (4 genera), and Anonaceae (4 genera) had the highest number of genera represented. Only three species were found in all twelve oases: sweet orange (Citrus sinensis L. (Osbeck), date palm (Phoenix dactylifera L.) and guava (Psidium guajava L.). Eight species were found in 11 of the 12 oases: the three species mentioned above plus lemon (Citrus × aurantiifolia (Christm.) Swingle), fig (Ficus carica L.), mango (Mangifera indica L.), pomegranate (Punica granatum L.) and grape (Vitis vinifera L.). The next most frequent species (present in 10 of the 12 oases) were papaya (Carica papaya L.), sweet chichona lime (Citrus limettioides Tanaka), banana (Musa × paradisiaca L.), olive (Olea europaea L.), and prickly pear cactus (Opuntia ficus-indica (L.) Mill.). The latter species is a bit more problematic, as some of the plants were clearly Opuntia × ficus-indica or perhaps a different Opuntia species. In the Todos Santos Oasis (south of the Peninsula) a higher number of perennial food crop species (79) and families (35) are detected as well. Santiago de los Coras, also in the south of the Peninsula, had the second-highest number of species (48) and families (24). This process of hybridisation of seeds of European origin, together with the aforementioned shrub or tree-fruit species managed by the native peoples, allows us to consider the oases as seedbeds for in situ conservation of agrobiodiversity. 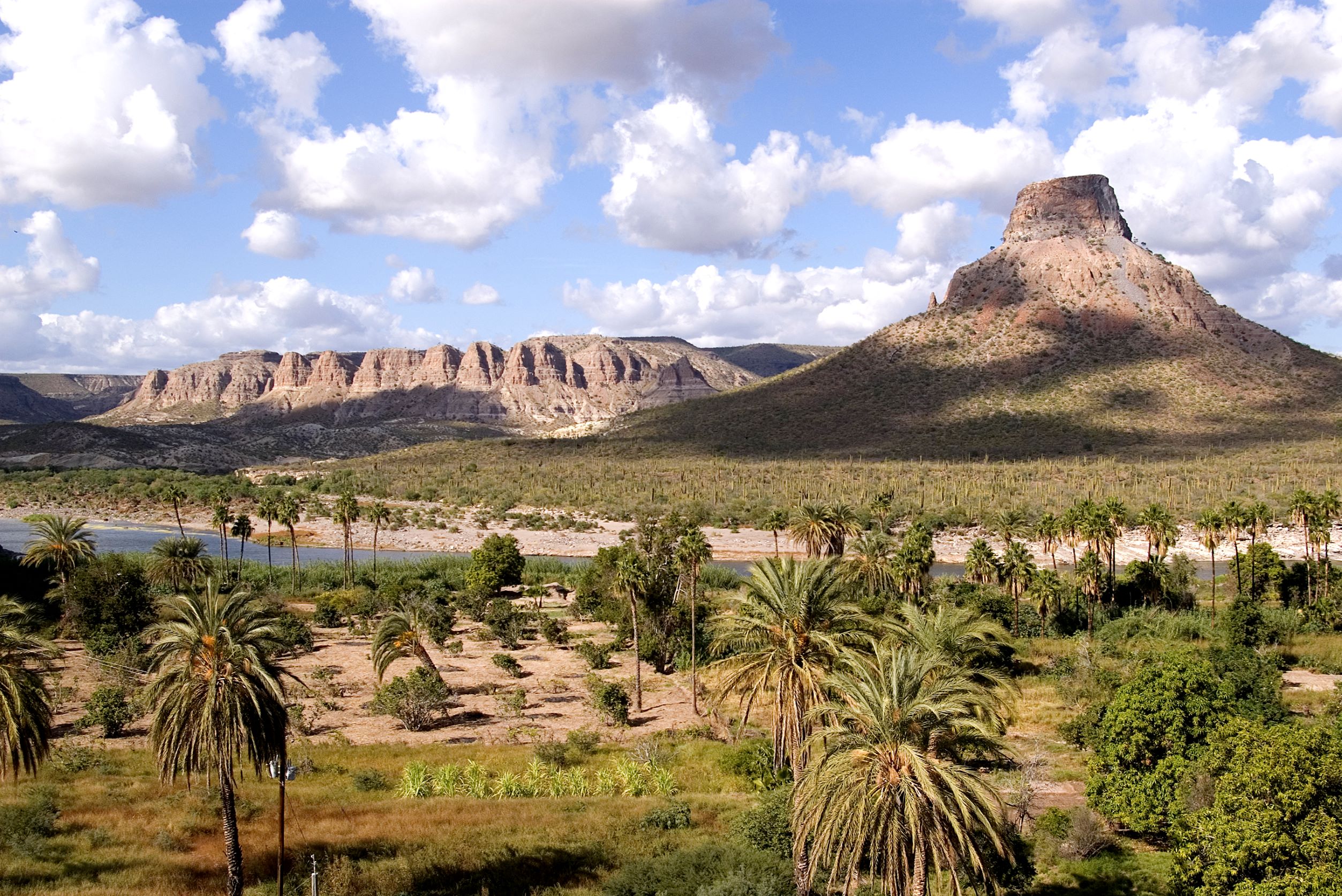 These Oasis Missions became repositories of bioculture, bringing together the seed management knowledge of the native peoples with the agricultural and water management know-how – with the design of irrigation ditch systems also transferred. This biocultural legacy has shaped a desert landscape that combines dry and humid lands that have survived to the present day.

Antonio Ortega Santos is a Professor of Contemporary History, Coordinator of the International Doctorate in History and the Arts at the University of Granada and Lead Researcher of the STAND Research Group (South Training Action Network of Decoloniality). He is the coordinator of the Virtual Postgraduate Course “Socio-environmental Epistemologies. Narratives for Re-existences in the Global South”, Epistemologies of the South, CLACSO, and of the Red Universitaria de Historia Ambiental (RUEDHA). He has been Visiting Professor at Yale University, Ecole des Hautes Etudes en Sciences Sociales and Instituto de Investigación en Ecosistemas y Sustentabilidad (UNAM, Mexico).