Pottery production as a significant part of the sugar production cycle

One can hardly trace a portrait of Portuguese economic history without considering the relevance of sugar’s production and trade since the late Middle Ages and during the Early Modern Age. Notwithstanding the number of research papers on the subject, it is still difficult to do a global appreciation that this economic cycle had in Portuguese society. On the other hand, we are still missing a thorough analysis of the local and regional experiences where sugar production occurred in overseas Portuguese colonial possessions.

The plantation of sugar cane was attempted in southern Portugal as early as the end of the medieval period and was one of the main impulses for the settlement in the Atlantic islands in the 15th and 16th centuries.  Written sources are evidence of the importance of sugar mills in the occupation of the Atlantic archipelagos of Azores and Cape Verde but most importantly of Madeira and Sao Tome and Principe. In spite of the landscape modifications originated by plantations and mills, these alterations and influences go way beyond these overseas places. There is a historical and material dimension related to sugar production. 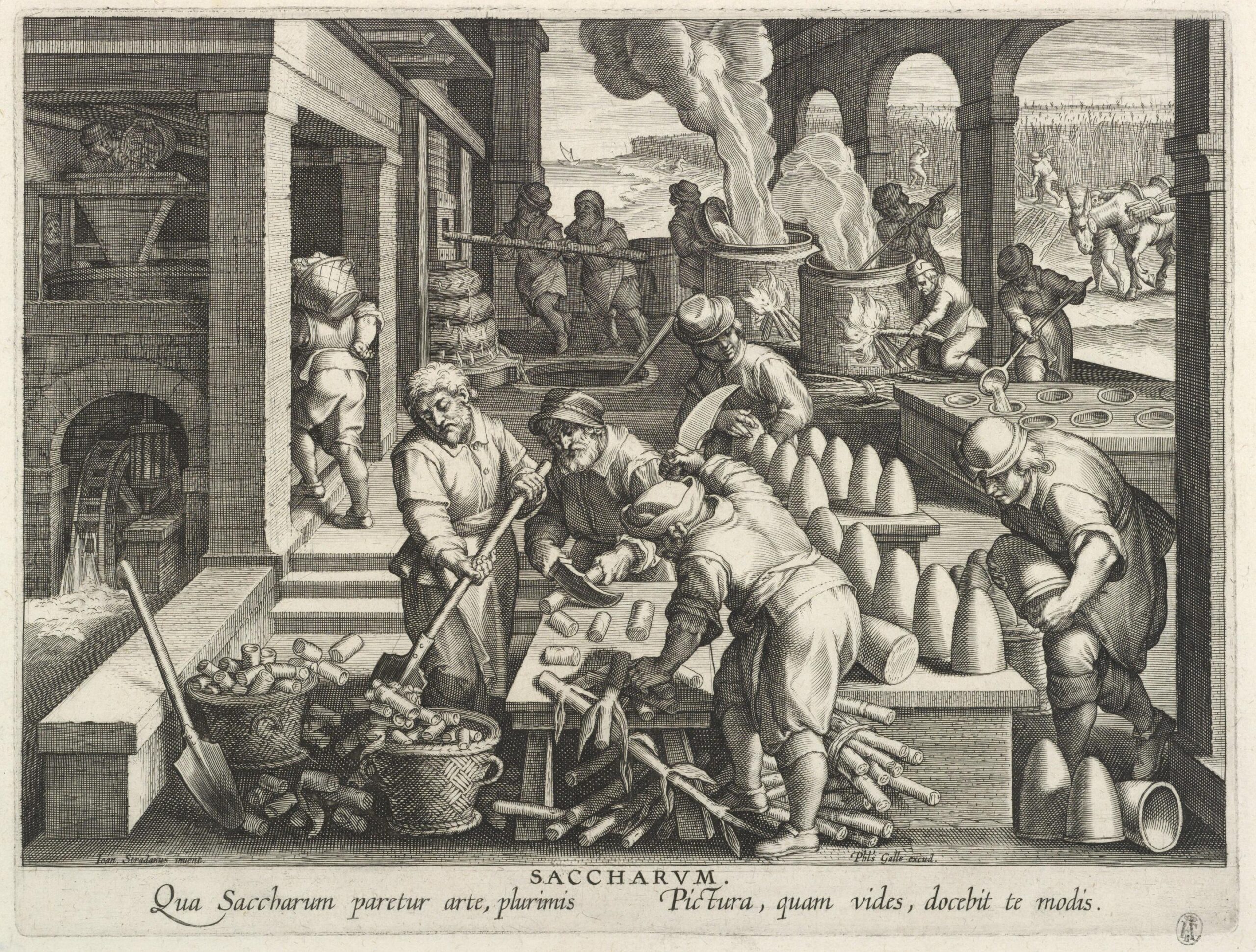 The potential of archaeological evidence

Most studies about the history of sugar production in Portugal and its overseas possessions have been made based on historical written sources, ignoring the potential of archaeological evidence for the development of new research directions. While earlier 15th century documents are the only source for the impact of sugar production in the country mentioning plantations – without specifying their size – in southern Portugal, by late that century Portuguese pottery workshops are going to assume a crucial and strategic role in this economy. In several parts of the country, sugar moulds, fundamental in sugar juice extraction, are going to support the sugar industry in the overseas territories. After several heating and boiling stages, the molasses was put inside conical pottery forms with a hole on their lower end (Fig. 1) from where juices would be drained and inside the recipient, sugarloaves would be kept (Fig. 2). These pottery sugar cones were massively produced and massively exported to the sites where sugar was produced since the pottery production on these overseas sites was only developed later. This production made Portugal a fundamental territory in the Atlantic sugar production economy in the Early Modern Age.

For some years now the production areas of pottery sugar moulds have been identified in Portugal. These are most of the time found in traditional pottery production areas such as Aveiro and Lisbon (and scarcely in the Lourinhã area), production zones that already had some relation to international trade.  The discovery of pottery workshops and associated kilns on the south bank of the Tagus River in the late 20th century was responsible for the change in the perception that historians and archaeologists had of the direct participation of Portugal in the Atlantic sugar economy. The archaeological excavation of sites such as Mata da Machada and Santo António da Charneca (located in Barreiro, south of Lisbon) discovered huge production complexes dedicated to the production of several types of pottery, sugar cones included, dating from the first half of the 16th century. For many years after this discovery archaeologists had the idea that this was the only area of the country where a massive production of sugar cones took place. Recent discoveries however demonstrated that intensive production was also happening in Lisbon at least since the late 15th century, again a zone with a long tradition of pottery production. 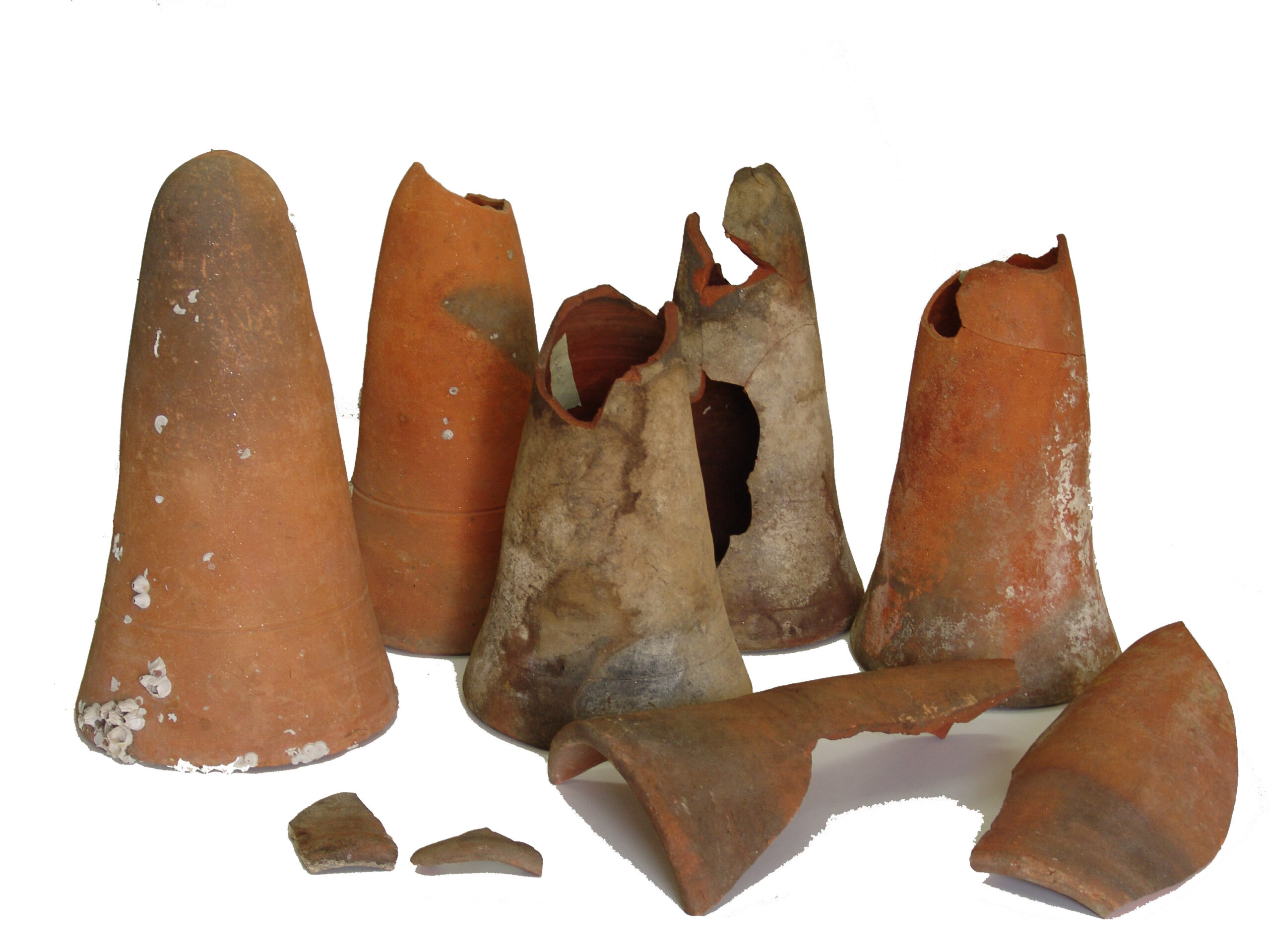 The Tagus estuary was one of the main production areas for sugar cones and only surpassed it seems by Aveiro so far considered to be the largest production centre in the country and the main supplier of the Atlantic sugar mills. This conclusion was reached through the analysis of documentary and archaeological sources which testify to the regular exportation of these ceramic pots from the early 16th to the early 19th century. This long period is confirmed by the discovery of large amounts of sugar moulds found in terrestrial and underwater sites within and around the city. The production was so intense that these sugar moulds were even used for other purposes such as their use on the top of mud-brick walls or in the corners of older buildings’ walls (Fig. 3). These objects reveal kiln fire accidents or different stages of fragmentation, making them unsuitable for international exportation which confirms large-scale local production. The elevated number of archaeological excavations made around Bairro das Olarias led to the identification of production sites, enlightening about manufacture chronologies, object morphologies and typologies, production scales, and production and dynamics. 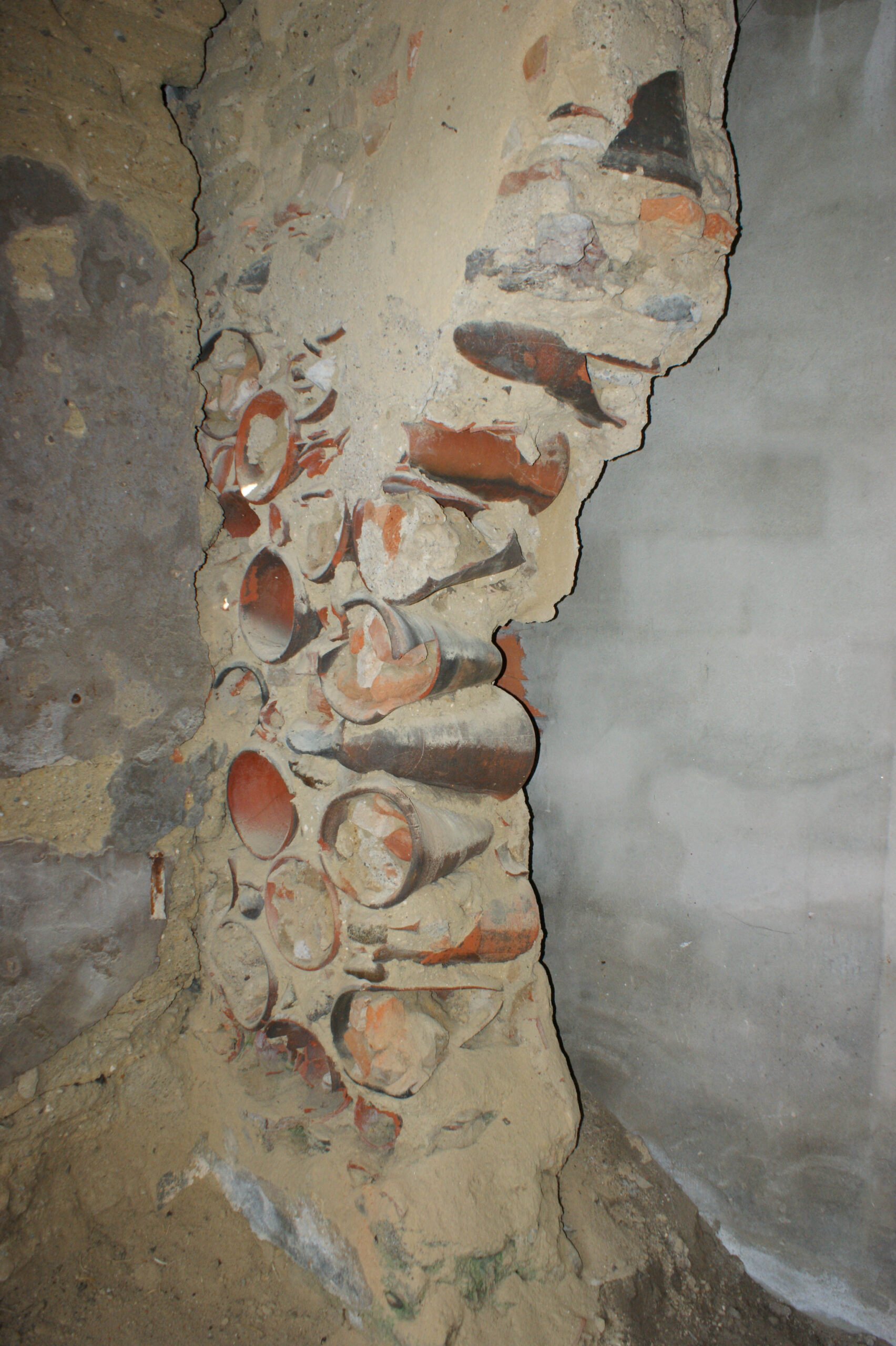 Adding to these terrestrial sites, underwater discoveries on the estuary and muddy shores shed light on the production and trade systems. The hundreds of finds in these sites are related to the trade activities and interpreted as accidents while loading and unloading cargos, cleaning of ship hulls or less frequently the wreck of transport ships, revealed by the way that these moulds are found, piled together.

The production of these objects is one of the most notorious examples of the large-scale industrial fabrication of many commodities associated with the Portuguese overseas endeavour. The country’s ceramic production centres exported massive amounts of sugar moulds produced by anonymous potters destined to the Atlantic sugar mills especially sent to several archipelagos and Brazil. However, much is still to be discovered about the direct relations between pottery production sites and sugar production sites, a tale yet to be told.

Ricardo Costeira da Silva. Ph.D. in Archaeology. Professor at the Faculty of Arts and Humanities, University of Coimbra (Portugal), and Researcher at the Centre for Interdisciplinary Studies (CEIS20-UC). In the course of his professional activity, he coordinated several archaeological interventions, especially in the urban field, from which stands out the archaeological works in Forum and Cryptoportico of the Roman city of Aeminium and old Episcopal Palace of Coimbra. Currently develops scientific research projects in the field of Roman archaeology (namely the coordination of the project in the Roman city of Conimbriga) and on the material culture from the period of Portuguese overseas expansion (15th and 16th centuries).