Forgotten practices, techniques, and crops: recovery of agricultural memory in Galiza in the late 20th century

The Instituto Nacional de Investigaciones Agrarias, better known by its acronym in Spanish (INIA), was and still is the main agricultural research centre in Spain. Its origin dates to the Spanish Civil War and the immediate postwar period when it was founded in 1940 to replace the original Instituto de Investigaciones Agrarias (IIA) created in the 1930s by the Second Spanish Republic. Its subsequent work was rickety and limited due to numerous problems such as the loss of valuable and experienced research staff as a consequence of Franco’s repression, lack of funding, and the absence of a coherent research and scientific management policy.

Although the US aid arrive in Spain in the fifties to reactivate the economy, in 1957 the INIA was still closing several facilities inherited from the old IIA to make the surviving research centres more efficient. Ten years later, in 1967, a World Bank report continued to point out the precariousness of agronomic research in Spain. Another report issued in 1971 by the International Bank for Reconstruction and Development (IBRD) pointed out several reasons for its poor trajectory:

For this reason, INIA received a loan of 12.7 million dollars for its reform and reactivation from the World Bank in 1971. Part of this investment was allocated to the reform and establishment of six national research centres including one based in Mabegondo, in the Spanish region of Galiza, called National Research Centre for Pasture, Forage and Livestock Production for Humid Northern and Northwestern Spain (Centro Nacional de Investigación de Pastos, Forrajes y Producciones Ganaderas para la España Húmeda del Norte y Noroeste).

The important role of two agronomists in Galiza

In this new centre, agronomic research was reorganized, focusing on the improvement of pastures and forages for livestock production. Apart from the purchase of new materials, young agronomists were also incorporated into the training, including Jaume Lloveras Vilamanyà and Juán Piñeiro Andión. Both developed their research focused on crop rotation in Galiza and carried out important fieldwork, taking photographs that allowed them to preserve a varied repertoire of agricultural and livestock practices that were quite common at the time and that would hardly be repeated today. Those engineers digitized the photos and published them in 2014 under the title “Una visión de la agricultura tradicional gallega (1978-1986)”. 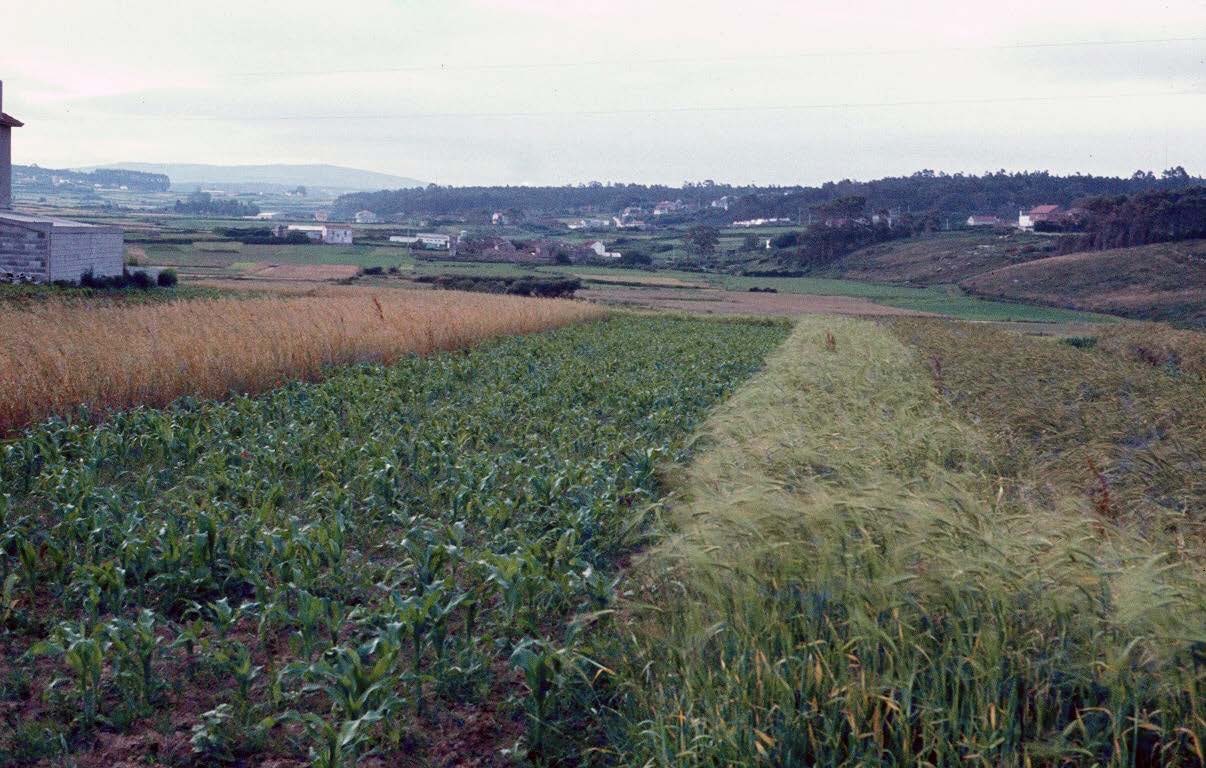 As can be seen in these examples, their photographic collection serves as a source of research and general interest in the historical technological changes, practices, and crops in Galiza. It shows the crop rotation between wheat, corn, and oats but also with machinery adapted to small producers such as the small oat harvester that can be seen below. 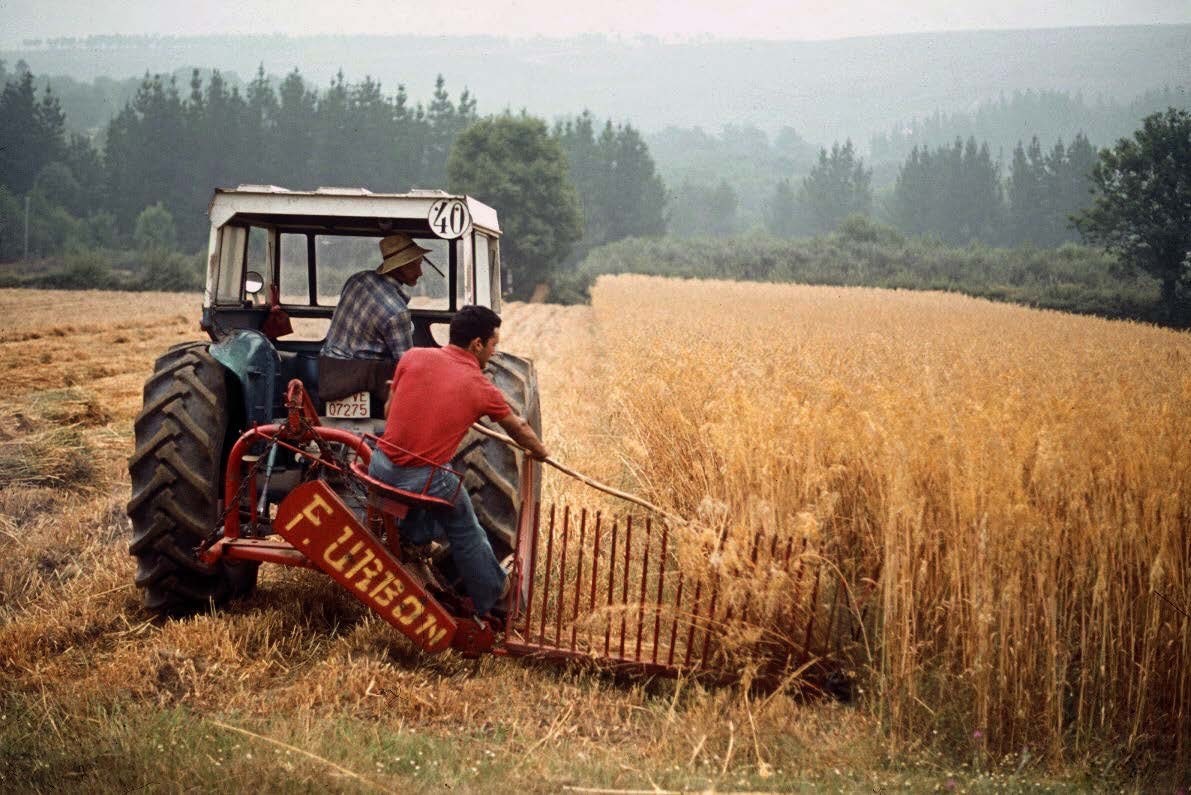 The practices and techniques appear repeatedly in the photographic collection. They serve to point out the dispersion and indefiniteness of the technological change process in agricultural industrialization in Galiza. Far from what one might think, the technological changes associated with agricultural industrialization did not occur in an orderly manner but rather disorderly, or in a mosaic, or as a constellation of techniques that coexisted at the same time and in space. As it is known, these changes were costly and risky. Few farmers used them in a drastic way, and the normal thing was to test, to adapt, little by little, until completely changing the mode of agricultural production and the crops and techniques. Thus, we can see both motorized work (with a tractor), mechanized work (with a plow, and draft animals), or manual work. See for example the harvest of rye by hand in the following photograph. 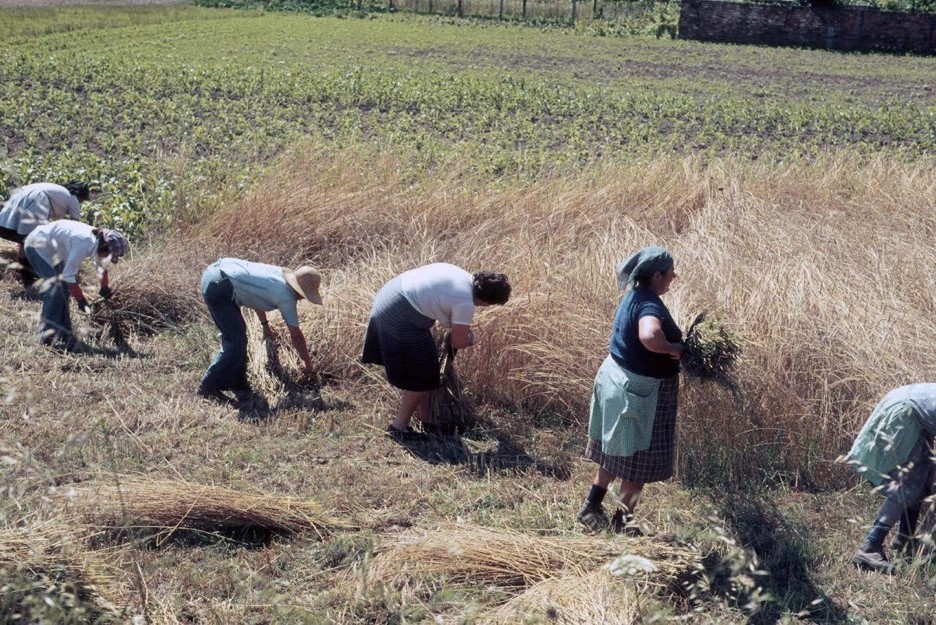 It is never quite enough to reiterate that collective memory is a fragile thing, and that memory losses and ruptures can be drastic and profound. That is why rural history and agrarian historical research are important, as well as the results of the fieldwork of those engineers financed by the IBRD-INIA agreement of 1971.

Traces of that varied crop past can still be sought today. See the traditional peasant fireplace with bread oven (left) and bundles of wheat (right) inside an abandoned but rich peasant house long ago. Nantón, Comarca de Barcala, Galiza, 2020.
Source: Own fieldwork